It has been a while but progress marches on and we are at a very critical juncture. We are snuggled tightly between “ready to finish “ and “finished”. Pretty exciting!

Since last post the largest (and most expensive) project has been completion of a totally new Sundancer driveway. Past visitors will know that the original Sundancer drive, built with the house in the mid 80’s was a challenge. It was narrow, difficult to maneuver at the bottom and the lower retaining wall was in constant glacial movement heading to the sea because it was constructed on fill dirt. During our project, significant portions of that wall completely collapsed and had to be broken up and discarded.

In my last post, I showed preliminary photos of some of the extensive form work necessary to replace it with an ingenious engineering feat that saved us from having to dig extensive trenches filled with concrete perhaps 12’-15’ deep to build new retaining walls to hold up a replacement drive. Rather, using 12”x12” steel and concrete beams running perpendicular to the driveway at 10’ intervals, masons were able to pour the driveway plus an 18” high curb all the way to the street while adding about 2’ to the width of the driveway. 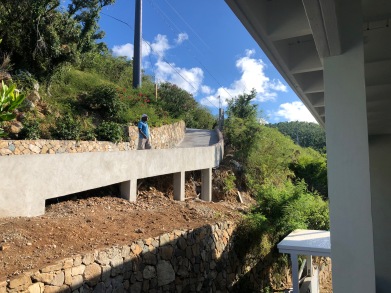 While this may not seem like a big deal, trust me. It was. It took six masons two weeks of daily grunt work to create precision forms plus they poured 60 yards of concrete to complete. (That is about seven truck loads!)

As Rob wrote when he sent final photos “ The driveway to last 3 lifetimes is complete!”

Other accomplishments include my closing in on the finish electrical work, installation of the solar panels, some rain water control landscaping, preliminary installation of our reverse osmosis water purification system, smoke detectors, plus a system to automatically monitor the amount of water in each of our two cisterns (thanks to technical skills of long time friend John Vollaro!). Final tweaking was done today as I returned to Sundancer yesterday.

In the meantime, a major milestone is the shipment of our final container which is now en route to us. We arranged for a 40’ dry container to go to Rob’s construction company shop in Flemington, NJ where his crew loaded with the custom cabinetry his staff had been building for the last couple of months. This is beautiful, tropical hardwoods for the kitchen, bathroom vanities and entertainment center.

In addition, all of the interior doorway and closet doors plus our appliances and tons of furniture, mattresses, soft goods, flatware, dishes and on and on!

That container arrived in Puerto Rico Wednesday and should be in St. John mid next week.

Finally, all of Carol Ann’s glass work is on a different ship heading to St. John and will arrive Monday. This includes the five amazing panels for behind the pool, a three piece glass mural for the outside of the house near the entry door plus the custom glass tiles for the kitchen backsplash. 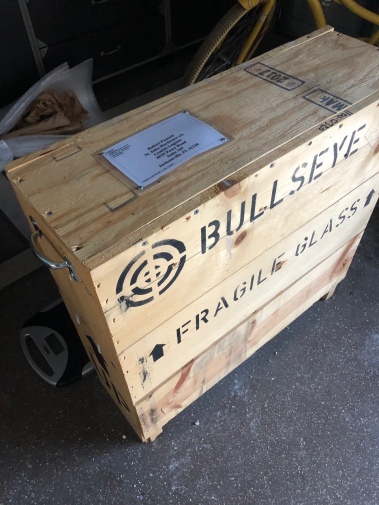 I await our electrician to hook up the solar system to start selling electricity back to our power company plus connect the solar powered pool pump which was salvaged from the old house. The place looks great. Can’t wait to fill it up with cabinetry and furniture!

7 thoughts on “Between “ready to finish “ and “finished””