Even we are amazed with the progress of the last couple of weeks! I am returning to Florida today and will return a week from Sunday. Rob is with his family in Jersey and returns on Thursday.

Let me update by department

Floor tiles arrived a couple of weeks ago and our tile crew went right to work. The tiles are all the same and are beautiful 12”x 24”. They finished in about a week and a half. Beautiful! 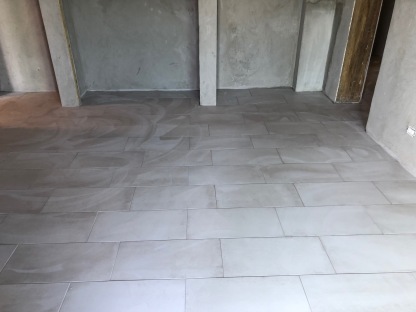 Immediately, the stucco crew returned. Recall that they had already finished the exterior. As of now, the lower level is complete plus the upper level should be done by this weekend.  Again – Beautiful!

The pool stairs and bench was poured early last week.  The event was that the concrete company had a schedule change and sent the pump truck and concrete several hours before expected by the masons.  The masons were on a job site where they had no cell service and didn’t get the message that crew was!  Daa, what now?  The pump crew and concrete truck driver jumped in and completed the pour and the finishing on their own.  Go figure!

Coping was installed earlier this week. It is s beautiful silver marble from Turkey. Carol Ann’s custom glass tiles designed for the water line plus her sunburst mandala for the pool bottom was installed as well. 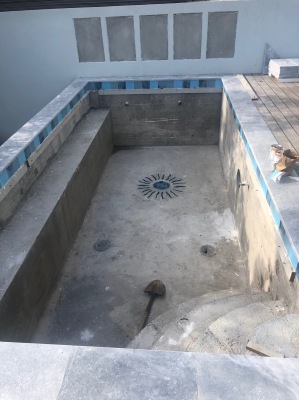 Plumbing and electrical for pool completed yesterday. We expect the pool finish and filling the pool to take place this weekend. (Yeah! Swimming!)

As of today the decking will be completed. The posts around the decks are installed and when Rob returns on Thursday he will bring cables for the sophisticated cable rail system.

All plumbing is ready for the fixtures like sinks, toilets and showers which will arrive aboard the “Final Container” which should arrive late next month. Our new state of the art septic system was installed and I finished installing the connection to the house and the electric yesterday. It will be tested this weekend.

While there are a few isolated “issues” that must be resolved when I return, our electricians worked the last two days installing the conduit and pulling the cable between the new meter monument at the end of the driveway and the panel box in the utility room. What is great about that is that they upgraded our temporary power to 100 amp service and it now feeds to the breaker panel. This means we can (and I have) fired up service throughout the house with the exception of a couple of issues remaining. I simply ran out of time.

Those who have visited Sundancer know that the driveway has always been an issue. The lower retaining wall was built on fill and it has been slowly leaning seaward since it was built in the mid 80s. Plus the driveway was narrow. We expected to have to remove that short wall and excavate down to hard earth and build a substantial and permanent retaining wall. (A huge project. $$$$). Our mason came up with an ingenious alternative which you can now see is taking shape. We have removed the lower wall. (Not that big of a deal as it had a tiny footing.) we have cut about 10 12” wide channels across the driveway. Masons are building substantial rebar “beams” which will be placed in the channels and cantilevered over the removed wall and filled with concrete and a new 5” concrete driveway poured on top. This will widen the driveway by about 2 feet. An 18” curb will also be built into the edge. Still a substantial project but not as big as big as a new retaining wall.