Rob and I traded places last week with my returning on Tuesday, getting up to speed on Wednesday and Rob’s departure on Thursday for his first return home in quite a while.  He is catching up on his business, celebrated Passover with family and friends and taking the family on a spring break holiday in Nashville next week.

While I was gone, Rob engaged a new excavator and a large amount of material was removed to make way for the footings of the new retaining wall (between the pool and driveway).  Lots of work!

In the meantime, another 40′ rack container arrived on Monday and following a relatively simple customs approval the rack was transported to a yard where a trucker brought us two huge crates filled with all of the windows and exterior doors.  Our guys and a couple of extras hands broke down the crates and loaded everything into the house according to “upstairs” and “downstairs”. 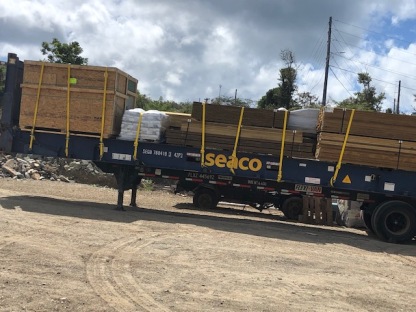 At the same time, the masons returned to begin preparing the footings.  It took a lot more work than expected because of the steep grade in that area and the mason’s fear that if not tied in properly to the virgin ground, the whole footing and wall was subject to sliding down hill.  After 20 years of putting up with the former Sundancer retaining wall moving every year by a couple of inches and pushing the pool deck further and further south, that was an experience we are anxious not to repeat!  As of Thursday, they completed site preparation for the retaining wall and the two other areas that will support the 10’ X 20’ pool.  Note that unlike the old pool that was set east and west, the new one will be set south and north.  Masons are now setting the forms and have begun to place the rebar.  Hopefully, we will have a concrete pour sometime next week. 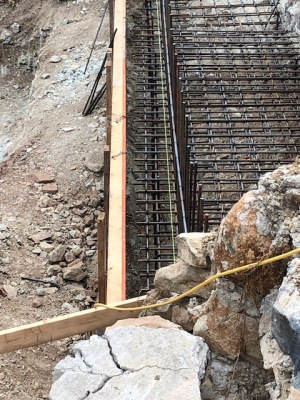 Speaking of the pool, Carol Ann is home feverishly working on the glass work that will be used for several applications in the pool area.  The first is creation of 120 6”x6” glass tiles which will be placed around the top perimeter of the pool below the coping and serve as the “water line” tiles.  She is firing those tiles now.  She will have other glass projects for the pool and in the house as well.  More on those later.  While not a great photo, best she could do with the light.

Some bored soul in our neighborhood complained to the building inspector that we did not have a required silt fence below our excavation site.  (We know who complained and still really don’t care.)  While I had hired two extra guys to help with the unloading of the doors and windows. I secured the silt fencing and armed the two guys with machetes and a sledge hammer to install the silt fence.  Took about half a day.

While I had them, I dealt with a nagging issue for me. Many will recall that Sundancer blew off of her pedestal during Irma and blowing the remains to the north east towards the top of the driveway and further east.  While I paid a sizable amount last year for a crew to remove the remains, the longer we are here, the more I realize that while they got the bulk of the debris, they left a sizeable amount that was somewhat hidden in “the bush”, but still on our property.  The fact is. parts of Sundancer are scattered over a huge chunk of Fish Bay as far as a half mile away.  (Who knows, maybe further!)  Anyway, I had the two guys spend the next two days, pulling rubble out of the bush, cutting it up into manageable sizes and loading on our truck.  I took four loads of “stuff” to the dump. 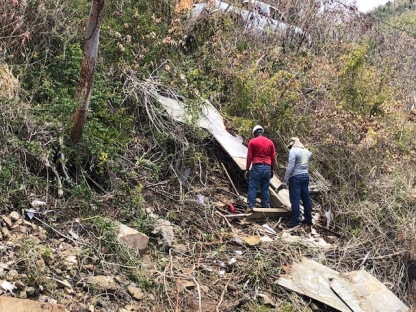 Turns out, one section was the full flooring system for the guest bedroom.  While most of it is now gone, there is still a large piece (right above) that I will tackle when we have some down time (whenever THAT might be.)

Truth be told, one of the many reasons Rob and I hired someone to remove the Sundancer debris was that when we visited the wreckage last October, we quickly realized that the project would be daunting and just as importantly, if not more so, the project would be extremely emotional.  There is no need to further explain that aspect, but this week, as I took each load of debris to the dump and was throwing it into large dumpsters, I was taken aback by the twinges of pain I experienced each time something passed by that carried another memory of Sundancer.  It could have been something as simple as one of our now faded sofa pillows or a door with “soft close” cabinet hardware. Evidence of personal touches we had added to Sundancer over the years was in each load.  Unexpected thoughts jumped into my head.  “Gee, I remember installing them!” “Wow, it is amazing how things once so important are now just rubbish.” More pain than I expected. “Remember Man, from dust you came and to dust you shall return.”  Anyway, not sure of the interest to anyone, but impacted me.

So, in addition to the masons, our team has been working on the roof.  They installed the cap on the parapets and have started to seal the seams on the roof.  (We are using a pretty neat GE Silicone applied roof coating).  They are applying tape to the roof system along the seams and applying the flashing material to the tape.  Once done, they will use rollers to coat the entire roof including the parapets. We are short a bit of materials and I headed to St. Thomas today (Saturday) for a shopping spree. 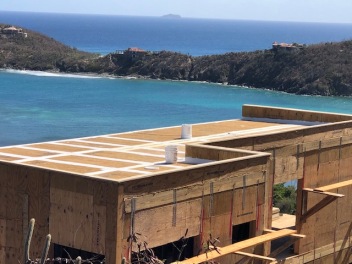 In the meantime, our team today went below and applied the waterproofing to the new cistern.  Once done, our plan is to move the “Irma water” that is still in the old cistern to the new one and then clean and re-coat the old one.

In addition to blog writing, I am the designated electrician and plumber.  I am pulling wires, setting switch, light and outlet boxes.  My hope is that this part of the task will be done in the next few days and I will move to plumbing.  I know, technically, plumbing is supposed to be done before electric, but just doing it my way.  I will have to call for an electrical rough wiring inspection soon but will have good friend and electrician walk through what I have done before I call for that inspection.  (Just to be safe.) 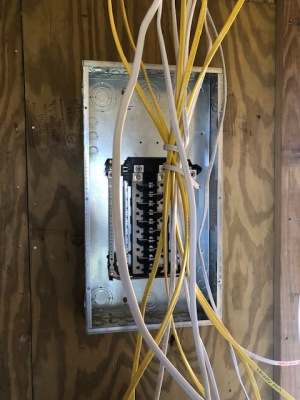 On the subject of inspections, our first inspection for the walls is scheduled for Wednesday.  While we should have had inspections for concrete, our mason kept telling us “don’t worry about it, they all know me.”  None the less, we diligently logged every step by photo just in case.

So, that’s the current story folks!

2 thoughts on “Piling on the progress!”